3 things a good designer will do 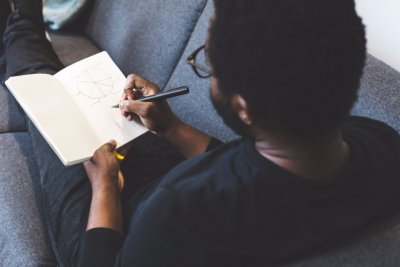 Finding the right design team for your project isn't always easy. Obviously there are things you can do to narrow down the field and help you find a good hire for your project. Looking at a designer's portfolio, following-up on provided references, and asking for recommendations are all great starts.
But how do you know you've found a designer capable of giving your project the professional care and work it deserves? By observing how they act. When you start meeting with potential partners discussing plans,  and laying out the groundwork for a project, watch for these three things to make sure you've found a designer you can trust.

Talk about your goals and business before providing "solutions”

Good design is all about solving problems, and you don't solve a problem by starting with the answer.
If you're meeting with a potential designer about a new site, service, or marketing strategy, and not five minutes into the meeting they are talking about their newest package or service, stop and think about what that says about their work. They aren't solving your problem, they're selling you a solution. That's not what you want, that's what they want.
This might be done innocently, a lot of designers are incorrectly trained this way. They aren't necessarily selling snake oil either, they probably do hope that their ideas or service will work for you, or at least overlap with your problem in a way that is close enough to justify the process. They might not even totally be aware of what they're doing. But, intentions don't matter when its your job or business on the line. It's a backwards approach that prioritizes their needs above the client's, which never works out in the long run, for anyone.
Good designers listen, they talk. They get to know you, your business, your project's goals, and then start suggesting things. When you hire a designer, you're hiring their expertise, so it isn't surprising that they would have some ideas as the conversation develops or refer to previous experiences and projects. That's fine, but they all need to be traced back to the needs of your project and solving your problem, not just "this is what we do, this is what we've done before, we'd like to sell it to you now please.”

Lay everything out in black and white

Relationships of any type are built on trust. Trust comes in many forms, wonderful and varied (love, friendship, Wookie life-debt, etc). But, in the business world, trust is best secured with a contract. A written and itemized list that lets everyone know where they stand.
Contracts can be hard for some people. They seem unfriendly, cold. Especially after the typical getting-to-know-you period where everyone is trying very hard to be likable and accommodating. Going from friendly smiles to nitpicking about line items in a legal document is about the last thing people want to do - which is why too many contracts are rushed, puny, and insufficient little things incapable of survival when exposed to the furious raw elements of an ongoing project.
Coincidentally, poor contracts are also the leading reason relationships between clients and designers go sour.
A good designer will always insist on a written statement of work with clear expectations and milestones written for both sides of the agreement before they push a single pixel or line of code around. This isn't because they're grumps who want to make sure they only do as much work as they absolutely have to - it's because they want to do the right work. They want to hit the most important goals, provide the right level of post-launch support, and ensure that every major feature has been budgeted and scoped so nobody is left with a nasty surprise later. A project that can support a comprehensive contract is a project that is thought-out, clear, and goal directed.
The number one poison pill for all design and client relationships is uncertainty. Not knowing what is going to be delivered by when. Not knowing exactly where one party's responsibilities end. Not knowing if something is billable, supposed to be included, or exactly what to expect on the bill.
A good contract levels the playing field. It might not seem friendly to hash everything out in such detail, but its far better than vague reassurances, poor project-scope, and hazy responsibilities. Never trust a weasel who doesn't want to sign his name next to anything and insists "we can figure that out later.” Demand professionalism.

When you're launching a website, a new marketing strategy, or whatever else, research and planning only goes as far as the launch date. If your designer is a professional, he or she will have a lot of good ideas, excellent reasons for the choices they've made, and past-experiences that back up their plans. But they'll also be paying attention after launch to know what went right, what went wrong, and how to improve or course correct if things aren't going right.
Good designers want you to succeed. They don't want to just get their contract, complete the job, and wash their hands of whatever happens. They want you to go to your friends and say "hey, these people really helped us, you should hire them too,” and they know that is only going to happen if the goals you agreed on are actually being met. Which is why every good designer will bring up post-launch support in the early days of a project.
Never be suspicious of post-launch support. It isn't a sneaky way of padding out a contract or adding a few more line items to the bill. It's an essential part of the process. It represents a commitment from the designer to stand next to their work and ensure you are satisfied with the results.