It might not seem like it, but your typography says a lot about your business. People read different intonations into different fonts, and some come with more baggage than others. Your choice of font sets the tone of what you're saying.
The easiest way to break it down is to think of your font as your site's voice. When selecting a font you should think of how you want to sound. Do you want your site to reverberate with the professional, reassuring tones of Morgan Freeman? Maybe the Or do you want to squawk and squeak like Gilbert Godfrey?
That's what I thought.
There are tons of great fonts out there to choose from, but today we're going to focus on three you'll definitely want to avoid – the Gilbert Godfrey's of the internet.

Look, I get it, you want your site to read as fun and friendly. You want a font that seems non-threatening and maybe family friendly.
But please, please. No more Comic Sans.
You could call Comic Sans a victim of its own success. Developed in 1994 for the upcomming Windows 5 launch to be the voice of "Window's Bob” a cartoon dog designed to welcome children to the wonderful world of word processors. According to creator Vincent Connare, "there was no intention to include the font in other applications other than those designed for children.” Imagine his surprise when a few short years later, Comic Sans would adorn everything from high voltage danger signs to police APBs.
Why is Comic Sans so popular? Likely a combination of factors. As stated earlier, it is a fun non-threatening font that can be welcome refreshment when you're sick to death of starring down line after line of Times New Roman. It is also a default Windows font available on almost any computer and near the top of the alphabetically sorted font list in most word processor programs.
I'm still not sure why you'd write a product recall press release with it, but there you go.
I'd like say websites for schools, nurseries, or actual comics might get away with using Comic Sans, but I just can't bring myself to. The millions of irresponsible web designers, type setters, and writers who have come before have salted the earth here. Comic Sans should be treated as a radioactive accident zone and avoided at all costs.
If you really want to evoke the playful nature of comic lettering on your page, try something like Action Man 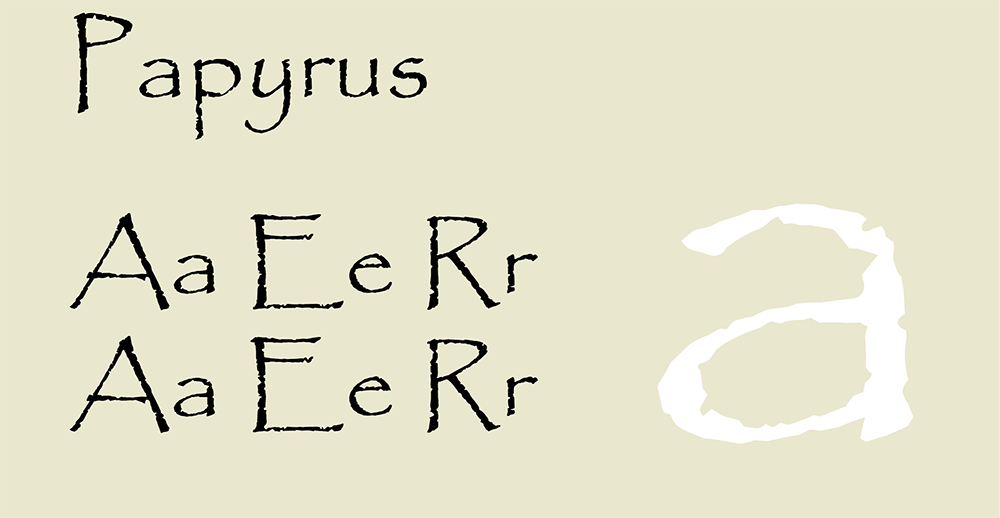 Wherever Comic Sans lurks, Papyrus is sure to be nearby. Rivals for the title of "most reviled font,” Papyrus is one of the most commonly used and loathed fonts in the world.
From fliers advertising coffee house jams to Yoga group sign-up sheets, Papyrus has become the shorthand way of positioning a brand or event in an artsy, whimsical light. Created in 1984, Papyrus was designed to approximate the look of English text written in ancient scribe. The approximation worked a little too well, as anything with even a slightly mystic or old fashion sensibility is now branded with the font.
Of course, it's the sheer ubiquity of the font that makes it so bemoaned. Not content to decorate market stalls and poorly xeroxed hand-outs about the benefits of hemp, Papyrus can be found in the glitzy world of Hollywood and hallowed halls of academia, decorating everything from movie posters such as Avatar and Serenity, to university letterheads.
If you really want your words to carry the mystic weight of the ancients, try something like Skia instead. All of the mystique, with none of the baggage.

Bradley Hand isn't as well known as Comic Sans of Papayrus, but trust me, you've seen it before. Any e-card your great-aunt ever sent you, listing soups of the day at the local high school cafeteria, or from spam trying to pass itself off as a handwritten letter, Bradley Hand is an ongoing menace to legibility and good taste.
On the practical level, Bradley Hand is bad simply because it's a difficult font to read. The handwritten letters are thin compared to most fonts, which makes it both ill suited for headings and announcements since the font looks bizarre when blown up, but also makes it dense and difficult to read when used in the body of a text. There just isn't a great place to use it.
From a design perspective, handwritten fonts are just goofy. Yes, they can seem relaxed and non-formal, but there is just something fundamentally ridiculous about trying to pass off machine text as handcrafted writing that many of us just can't get over. They're so aggressively inauthentic that using them almost seems less personal than good ol' Times New Roman or Arial.
I'm singling out Bradley Hand here because it is one of the most popular options, but really, this criticism can be extended to nearly any faux-handwritten font. Just don't use them. If you really want your recipient to feel like they're receiving a personalized message from you, spend some time writing more specialized and individual text than trying to pass off plain old copy as a message from the heart by dressing it up with a swoopy font. Or, you could always *gasp* try writing them a note or letter for real.